Poker in art and culture: the famous painting of dogs playing poker 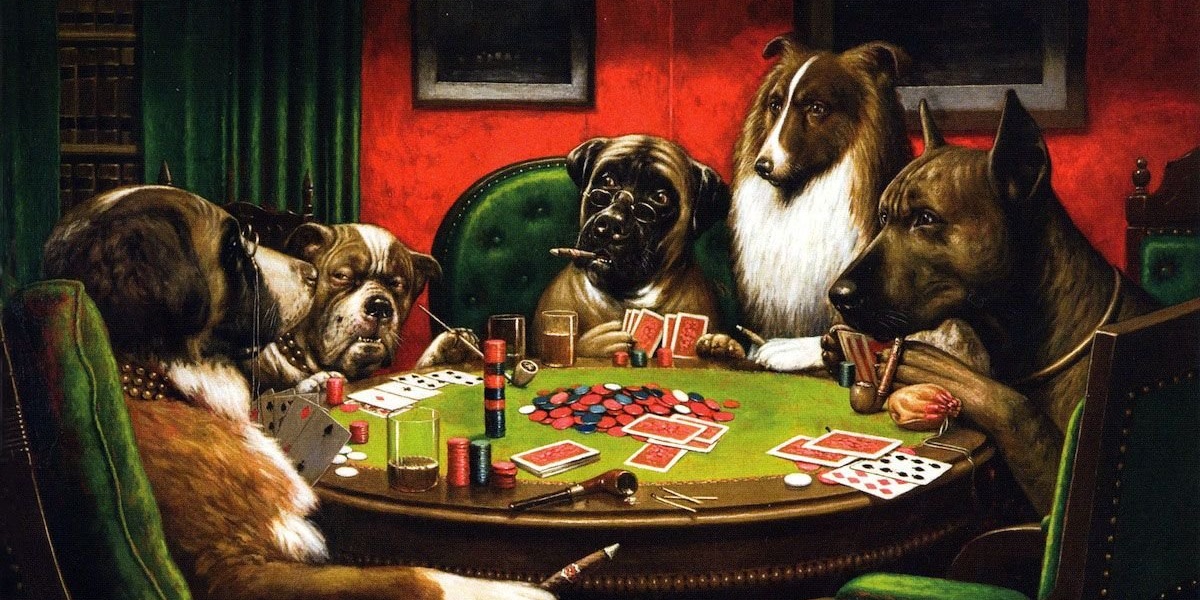 Popular culture is riddled with references to poker and, if we stop to take a look at the role that poker has played in the various formats of culture and entertainment over the years, we can see how important it has been and how recurrent it is to represent, in one way or another, a poker game on a canvas, a photograph or a film recording.

The impact of Coolidge's series on popular culture

Poker has provided the context for some of the best literary and cinematic stories of the last century and a half. Authors such as Ian Fleming have used poker to tell their stories (the creator of James Bond initiated the famous English spy James Bond in a frenetic poker game in the novel Casino Royale), and in the cinema countless westerns have been set in wastelands where there were always poker games and where some of the characters in the story usually faced each other.

However, if there is one reference known worldwide in which poker plays a leading role, it is undoubtedly the famous painting of the dogs playing poker. In fact, it is a series of paintings in which dogs are the protagonists and are represented in multiple scenes playing on a poker table.

A fragment of this painting can be seen in the second film adaptation of The Secret of Thomas Crown, when a Monet is forged over another copy of the famous painting by Cassius Marcellus Coolidge, to whom the 18 works showing dogs in different attitudes are attributed. Of these 18 compositions, in half of them the dogs are playing poker. In fact, artistically they are highly appreciated for the extreme humanization of the characters, as they are dogs with totally human reactions and attitudes.

Cassius Marcellus Coolidge was a New York artist who came a long way to devote himself to painting. In fact, his career was plagued by ups and downs and insecurities that, nevertheless, did not prevent him from creating some of the most amazing compositions in the world of modern art. The famous painting of dogs playing poker is a good testament to his character and his eagerness to make his way in the art world, and his work has been appreciated over time to be considered one of the great contributions to the art of his time.

Cassius Coolidge, known vulgarly as "Cash," painted the series around 1894 with one idea in mind: to represent the tastes of late 19th century American society. Bearing in mind that poker deeply touched the author, it is understandable that he used this game as a leitmotif for his representations.

When he arrived in North America, it is known that Coolidge was fascinated by poker, a game that was beginning to be considered little less than a religion. The number of players was increasing and Texas Hold'em began to attract hundreds of new fans. A modality that, it must be said, is not the one represented in Cassius' pictorial series.

It is known that these compositions were mainly intended to accompany some advertising campaigns of the time, hence the interest in representing various collective interests as a society in a faithful but stylistically different way, playing with that surprise factor. Taking into account the importance that this game was acquiring in American society, the idea of representing dogs playing poker in half of the compositions of the series began to make sense.