Which is your best Poker Face? 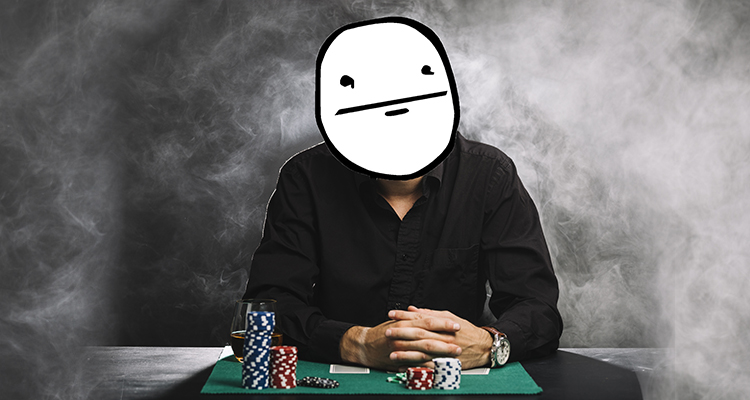 We have all put poker face once, even without knowing it, especially when we were children, during the interrogation after some mischief. Consciously or unconsciously we use our body language and our gestures, voluntary or not, to convey a message. The body speaks and that's why in some cases we have to shut up it, especially if you are Patrick Antonius or if you are in a poker game where you don't want anyone feel your emotions.

But putting a poker face is not exclusive to this board game, and although its use has become popular, especially since the appearance in 2010 of the 4chan forum memme, putting poker face has been used throughout history in both the financial world as in politics, associated with well-known characters such as Trump or Putin or even in anthropological studies

The novelist Graham Greene wrote a review in 1934 about Sir Arthur Conan Doyle with the title "The Poker-Face", referring to his excellent work in his novel Sherlock Homes, where the detective and the author worked that same concept showing that, who controls the true face of poker, in the end will learn how to read the face of his opponents. Maria Konnikova, Russian-American psychologist also published an essay called "How to think like Sherlock Holmes".

There are studies of different types such as "The Wall Street Poker Face" by Aaron Brown, which analyzes the relationship between the world of finance and the game system in poker; or "Faces of Poker" by David Hayano that publishes his anthropological study based on the impenetrable face of poker players. Or in the artistic field as the series of photographs "Poker Face" (1 and 2) of Ulvis Alberts on the WSOP published in 1981.

In sports you can also find many examples of the poker face uses as part of a strategy, trying to control the emotions. Grantland Rice described Helen Wills, who won 19 Grand Slam titles in the 1920s as "Little Miss Poker Face".

It has been precisely tennis and science that have demonstrated a few years ago that our intentions are not only visible in the face but rather in our body or our gestures, voluntary or not. This study was conducted by the Israeli Hilliel Aviezer as a result of a collaboration between Princeton and Jerusalem universities; the investigation consisted in observe the expressions of Serena Williams and Rafa Nadal in high tension moments. 45 students, divided into groups, would have access to different parts of the body, others to the complete photograph, or only to the face. The result confirms that the mind lies to us more than we think, and is easier read our true emotions in our hands, arms, legs and even veins.

In the world of poker, in addition to the essential sunglasses, there are also those who prefer to play with a good long-necked sweater to cover any swollen vein as a result for the tension of the game, or with a hat covering his ears; As a useful fact, we recommend you add gloves to your kit if you are one of those who sweat by the nerves or who bite their nails.

Now you know that put your poker face helps but isn't all. So don't try to become a mime, the strategy is important but knowing how to play is even more important .