Meet Poker Alice, the legendary gambler of the far west 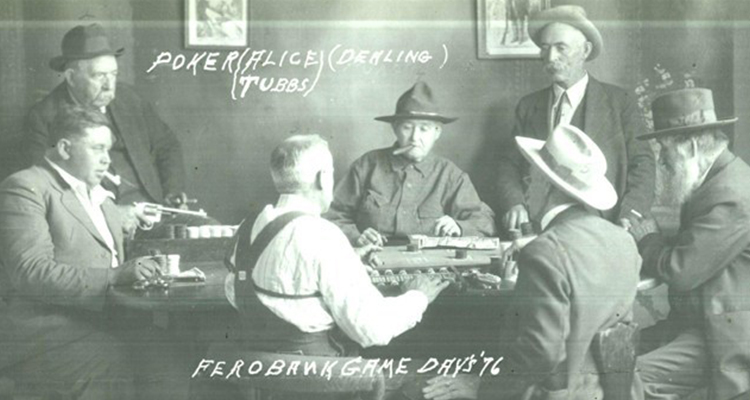 Poker Alice, the legendary gambler of the far west

Today we bring you the story of Alice Ivers Duffield Tubbs Huckert, better known as Poker Alice. If you never heard about her before, should know Poker Alice  was one of the most influential women in the gambling world of the last century, and we are not talking about an Alice in Wonderland, but rather, an Alice living in South Dakota.

As an Irish immigrant, Poker Alice was born in Devon in 1851 to move very young to Virginia. Frank Duffield, her first husband was who introduced her to the Poker world, although Alice soon forged her own reputation as a gambler playing and winning in famous halls like Silver City in New Mexico. In addition, Alice not only played, she also worked as a dealer during her stay in Colorado.

Some say that her woman weapons and her wear clothing served to distract their opponents, but the reality is that Alice was a great strategist besides having a great ability to count cards.

Her life somewhat truncated by the tragedy and death of her three husbands, made her a struggling woman capable of opening herself a way in a mostly masculine world. Her job as a poker dealer, led her to kill a man with a 38 in the Bedrock Tom's Saloon defending an employee, Warren Tubbs, the one who would be the father of her seven children and with who moved to live to Deadwood.

After the death of her husband, Alice contracted numerous debts, but she got to protect her family using her skills in Poker. She had to pawn her wedding ring to bury her husband, and bet everything they had left to get it back. And so she did, in addition to getting enough money to open her own salon, the "Poker Palace" in South Dakota, becoming Madame and her own boss from that moment.

Several series have echoed Alice in their stories, as is the case of the character of Barbara Stuart in the Western series of CBS, the Texan; also the new Maverick, although no doubt the best known role is the performance of Elizabeth Taylor in her Poker Alice series.

Although her last days were involve in constant clashes with justice for prostitution and smuggling (even going through jail for murder some drunken soldiers who vandalized on her saloon), Poker Alice became a iconic character of the american Poker, as one of the strongest Women of the far West in the Twentieth century.