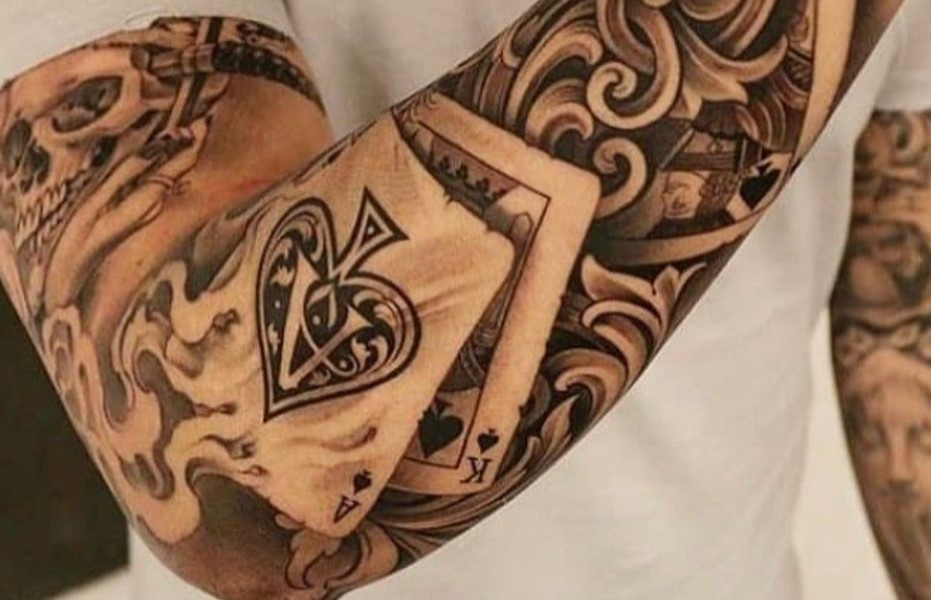 We can't deny it: we love poker. And what better way to express our passion for this game than by getting a tattoo of something related to it on our skin? As we become more assiduous in poker environments, the more we realize that poker tattoos are more frequent than we could have imagined.

Playing chips, cards or dice are the most representative designs in poker. We can find them in color, in black, with gradients ... everything will depend on your personality and tastes.

Poker cards tattoos are the most representative and popular within this theme. In general, the queen of cards in tattoos is the Ace of spades, followed by the Poker card. However, we can find other symbols such as spades, hearts, diamonds... each of them having a different meaning.

If you do not decide on the shape, style or symbol that you want to capture on your skin, we leave you with several ideas of poker cards design to tattoo. In addition, we decipher the meaning of poker cards tattoo to help you find the one that best suits your personality. 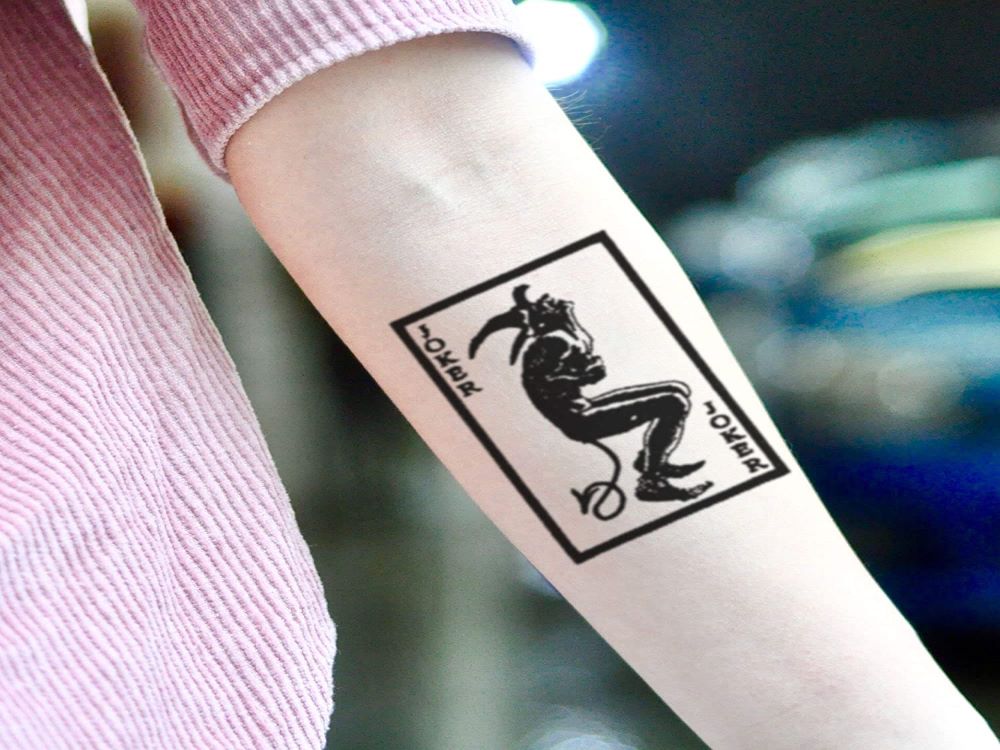 This is one of the best-known villains in the world of cinema, as well as one of the quintessential figures of playing cards. This character, who appeared around the middle of the 19th century, represented a court jester, although, depending on the context, his meaning varies.

The Joker card in poker can be replaced by any other card in the deck, thus acting as a joker. This function will depend on the variant of poker we are playing since, at other times, we will have to avoid the Poker card at all costs.

The meaning of this tattoo is a symbol of good luck. Although it can also have negative meanings, such as cheating. It is therefore an ambiguous character, with double standards.

The ace of spades

This is the card tattoo par excellence. The ace of spades, within the game of poker itself, always represents a good card, associated with the highest value. Since the 17th century, when card games were already known, the ace of spades was related to good fortune.

That is why, on many occasions, we see the tattoo of the ace of spades card next to poker chips, a way to attract good luck and fortune.

Dice are the ultimate expression of luck. Associated with poker cards, it can mean that in the game you benefit more from fortune than skill. It can also be interpreted as meaning that, despite your good play, your games are always accompanied by luck.

The royal flush is the unbeatable hand in poker. It is the most valuable hand and also the least frequent. The tattoo shows the five cards that make it up: the Ace, the K, the Q, the J and the 10.

The royal flush tattoo is a symbol of ambition and self-improvement. A sign of your desire to achieve the highest goals. 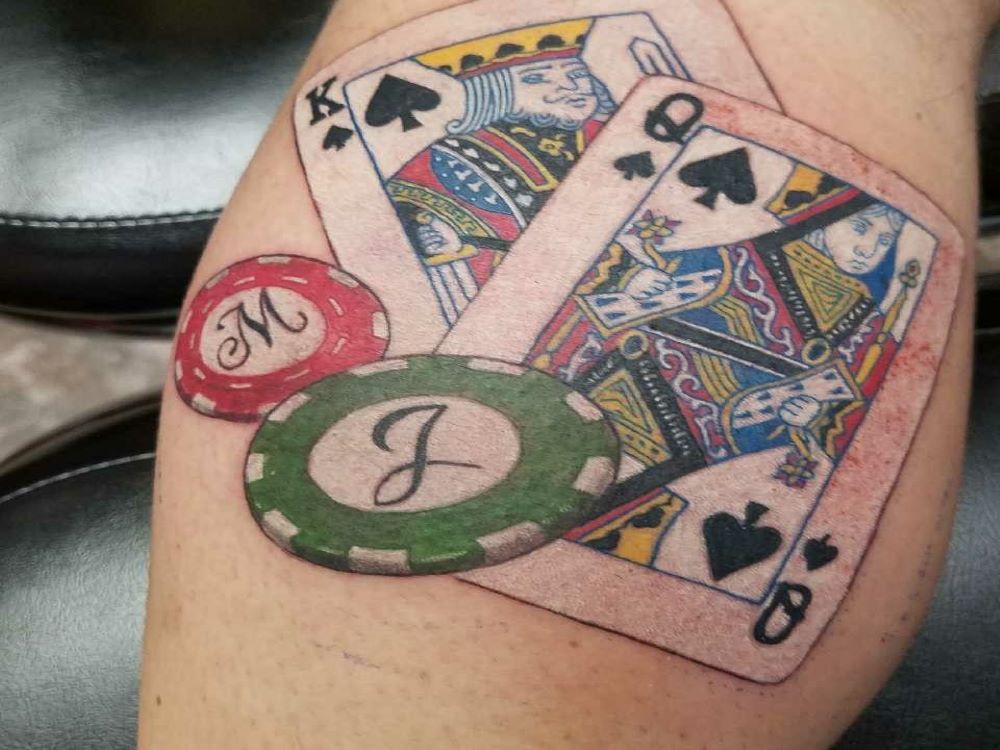 To make it clear that your tattoo not only represents a mere card game, you can include the iconic poker chips. In addition to clarifying possible doubts as to what it represents, its meaning is that of a successful person, who bets hard and achieves what he/she sets out to do.

Another way to express your confidence and bet on luck is to include in your poker cards tattoo, the roulette of luck. In this case, tattoos tend to be of large dimensions given the shape of the roulette.

Although it can also be done in small areas, such as the foot, the most common is to see this tattoo design on the back, arms or chest.

Surely, one of the most popular. This design is a classic, whether you love poker or not. Spades, hearts, diamonds and clubs have a meaning in themselves, each one of them. Generally speaking, they are a symbol of luck and fortune.

The design of this tattoo can be minimalist and discreet. You can even choose to color two suits in red and leave two others in black, resulting in a very original tattoo.

Just as we have seen the poker cards accompanied by the dice of fortune, the goal we pursue by playing our cards is money. The meaning of poker cards and money represents your desire for material goods and ambition. 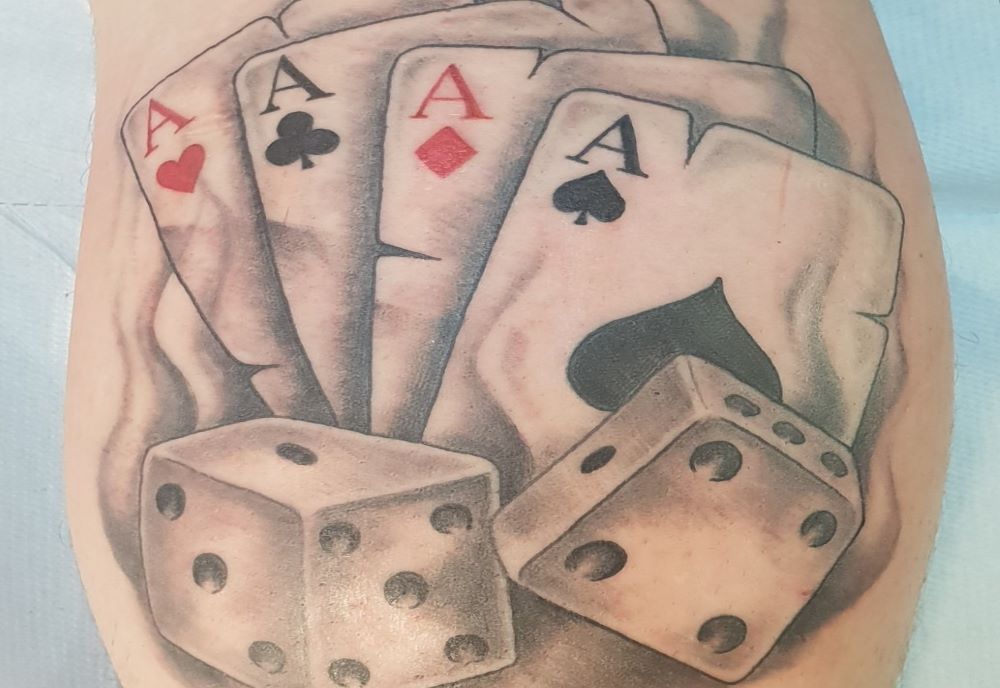 The poker aces tattoo has a very positive meaning. If you choose this option, you will be betting on a symbol of victory and good luck. It is among the most chosen designs by professional poker players, along with the royal flush design.

An example is the K for spades and the Q for hearts.