Doyle Brunson: why you should get to know this poker master 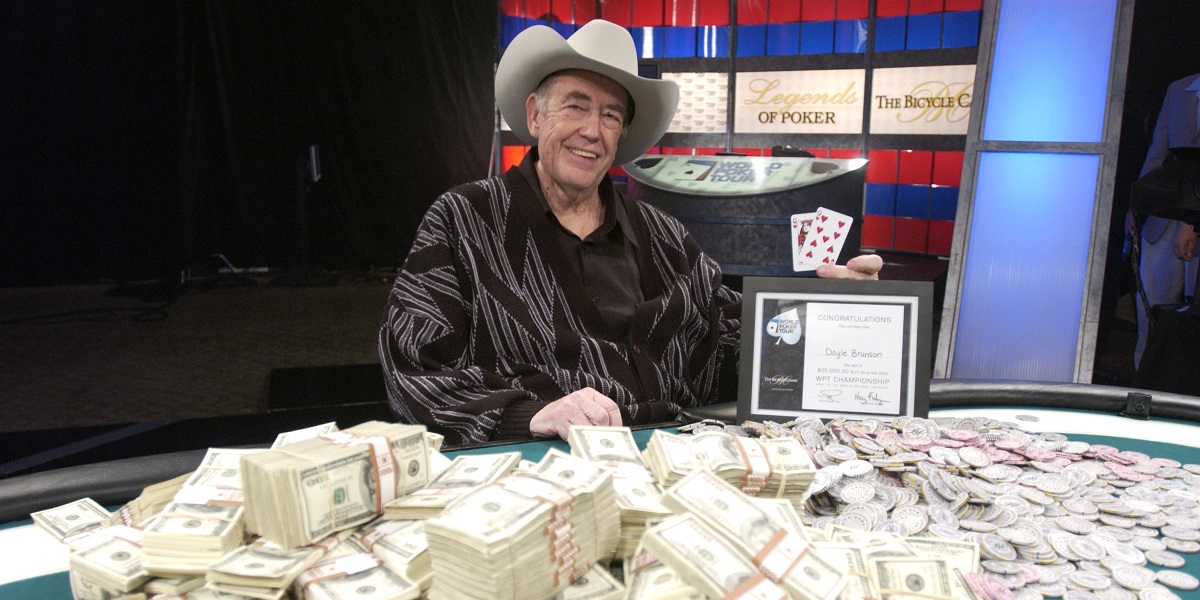 A poker fan usually uses the history of other poker legends to study their game, to know aspects of their technique that are helpful and, incidentally, to use the trajectory of their precedents to find a reflection that allows him to have references in order to evolve and gain experience. If we ask those who today are true modern legends of poker, we can see that each one has his reference and will justify the reasons that have led him to such a choice.

However, there is consensus in affirming that Doyle Brunson is the most transcendent poker legend of the last century. Brunson has dedicated his whole life to poker: he has played for more than 60 years, has played games that today are considered legendary and has been a reference for a whole generation of players who saw in him their aspirations for the future on the green carpet. But let's go step by step and get to know Doyle Brunson better.

Brunson and his youthful aspirations

Doyle Brunson is considered by many as one of the founding fathers of poker. And the mark Brunson has managed to leave has been so deep that the new generations of players often take Doyle Brunson as their main reference (but not the only one). But poker was not always the American's aspiration. Did you know that his passion was the NBA?

Yes, Doyle Brunson's dream was to become an NBA star. But that dream was cut short when a knee injury dashed all his aspirations. Among his college classmates, however, his passion for basketball always stood out, a sport to which he was able to devote part of his youth thanks to the scholarships he received to study at Hardin-Simmons University in Abilene, Texas.

That passion for basketball came as a child. Brunson was born on August 10, 1933 in Longworth, a small community located in Fisher County, Texas. It was a small rural town of barely a hundred inhabitants, where they were mainly engaged in agriculture and where Brunson spent his entire childhood.

In fact, Doyle Brunson and poker did not come together until later in life. His family lived on a small cotton farm where they lacked basic supplies: no running water, no electricity. Despite these shortcomings, Brunson was a very active and curious child from the start, and it was in high school that he began to excel in basketball and track and field.

Brunson's passion for basketball was not merely testimonial. It was also evident to the Minneapolis Lakers players that Doyle Brunson was a top player and the team was interested in having him on their roster. However, as we mentioned a few lines above, this dream came to nothing because of a particularly serious accident suffered in a local plaster factory that would leave Brunson with a knee injury for the rest of his life. Despite the setback and having his aspirations thwarted, Brunson continued his studies and graduated in 1954. In the years that followed, he earned a master's degree in administrative education and set his sights on becoming a school principal. But fate had other plans.

Despite seeing his other aspirations fulfilled, Brunson was not entirely happy. He felt that the salary for school principals at the time was too low and made the decision to explore other avenues. Before deciding to become a school principal, Brunson ended up working as a commercial machine salesman to earn a living. His colleagues invited him to a poker game on his first day to get to know him better and integrate him. The result? Brunson won more than a month's salary that night. It was clear that young Brunson had potential.

These feelings were confirmed over time. The more poker games he played, the more it became clear to him that he was good at poker, and the idea of aspiring to more soon crossed his mind. When he was fully aware of his potential, Brunson decided to leave the company to begin a career as a professional poker player. Doyle Brunson and poker had begun to combine their paths. The rest, as they say, is history.

Brunson is considered by many to be one of the founding fathers of poker. He has won 10 World Series of Poker (WSOP) bracelets in his career, including two consecutive Main Event titles in 1966 and 1967. Only Phil Ivey and Johnny Chan have equaled those records, and even Phil Hellmuth surpassed him, reaching 15. And there goes another record: Brunson was the first person in history to win more than $1 million in live poker tournament winnings. Almost nothing.

A particularly important chapter in Brunson's career is the one that has to do with the so-called "Legendary Texas Rounders", a team of professional poker players who dominated the game between the 1950s and 1960s and of which Brunson was a member. But let's recap a bit.

Brunson met his wife Louise in 1959. In August 1962 they were married and Louise became pregnant shortly thereafter. All was happiness until bad news hit the family like a cold shower: a cancer had appeared in Doyle's neck and had been spreading, as the doctors found out when they performed surgery. The prognosis was not good: doctors gave him no more than three months to live, although palliative treatment promised to extend his life long enough to see the birth of his daughter.

What happened next was little short of a miracle. After the second operation, and after the doctors' check-up, the tumor had suddenly disappeared completely from Brunson's body. Time confirmed that this was no mirage: the cancer had completely disappeared. Brunson was able to witness the birth of her daughter and has suffered no sequelae from the disease for decades. The tumor suddenly seemed to be completely cured.

When his daughter was born, Brunson moved to Fort Worth, a central Texas city where he played poker games of dubious legality with Dwayne Hamilton, one of his good friends. In the following years he would meet other figures who are now poker legends, such as Sailor Roberts or Amarillo Slim. This friendship would forge what would end up being the group of the Texas Rounders, starting their activity at the gaming tables during the following months.

The years of bonanza came to nothing when the legendary players came face to face with reality. They spent the money they had won on a trip to Las Vegas and lost all their funds at the drop of a hat. They arrived as legends and left as rookies, a lesson that should serve mid-level players well so that they don't lose everything they've earned by getting carried away by a mirage. To this day, that anecdote is fondly remembered.

Doyle Brunson has left phrases for posterity throughout his more than 60 years of poker career, but the one his fans liked the most was undoubtedly the one he used to announce his return to Las Vegas. Things had changed since that fateful youthful escapade, and he continued to play until 2018 when the American announced his definitive retirement from poker. Having participated in almost every Main Event up to that point, Brunson decided to put an end to his prolific career. He had already left an indelible mark on the poker world and would always be remembered as a legend.